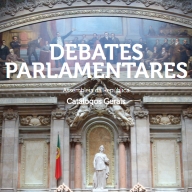 Metatheke developed for the Portuguese Parliament the new Parliamentary Debates information system. The web application allows to search and read the transcripts of the Parliament reunions since the Constitutional Monarchy (1821-1910) until the current Third Republic (since 1975).

The new application presents a renewed interface, adapted to mobile devices, and new search and reading features. It also interoperates with other Parliament's information systems, such as the Audiovisual Archive and the database holding the parliamentary activity the the legislative process.

From the technological perspective, the system's architecture and technologies were completely reviewed. The Debates application now runs on open source web server, programming language, and database.